Living alone in the back country of Arches National Park?  At least Ed Abbey had the company of rattlesnakes.  Living in an upstairs apartment in Missoula, for the first time in my life I lack the company of what can be just as toxic: roommates. 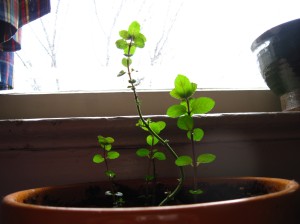 Apartment solitaire, I learned in a recent New York Times article, now describes one in four American households.  This solo-habitation (wait, is that the opposite of co-habitation?) may be old-news for many people, but after having fifteen non-family roommates in the past seven college-grad-school years, it’s new to me.   My friend Beth at Walksonstilts recently wrote a funny confession about her living-alone habits, but I don’t know if the arrangement is good for me at all.  The Times article did little to assuage my doubts by reminding me of the weird habits developed by that famous sole-habitator, Kramer, on Seinfeld: he prepared dinner party salads in the shower and reorganized his apartment with used furniture from the set of the Merv Griffin Show.

Though I have yet to prepare any radish garnishes in my shower, I have started to notice quirks about myself that I never noticed (or had to notice) before I signed this one-bedroom lease.  Some habits are boringly benign:  I tend to leave drawers and cupboards slightly ajar, I don’t put away my clothes right away after doing the laundry, I let dirty dishes compete for space with a dictionary and notebooks on my kitchen table.  Yawn.

Other habits make me feel happy in the moment but a little sad when I stop to think about them.  Every week, I check the basement second-hand store of the local senior center to buy their entire stock of twenty-five cent candles; the animation of the flame is comforting company as I write at my desk or cook dinner.  I talk to my plants and to my cupboard and to no one.  And, in the fall, when a single Asian lady beetle found my apartment, I relished the company of its motion and flitter sounds every night as it tried to navigate to freedom in the lampshade on my desk.  For a week or so, the liveliness of the beetle added something unexpected and stimulating to my environment.  When I found it crushed, almost unrecognizable against the red of my kitchen rug, I felt sorry.  And I felt sad.

Still, wouldn’t I rather have crushed Asian lady beetles on my rug than again have a cohabitant like that that dorm-assigned roommate who kept two rats under her bed?  Nights were haunted by the subtle grinding sounds of their chewing; after a few months, they had chewed holes in the giant stuffed tiger she also kept under her bed.   White polyester stuffing oozed across our floor.

Of course, everyone has collected some crazy roommate stories.  Everyone has inspired some crazy roommate stories.  Whenever I’ve felt lonely or unstimulated in my current living situation, I try to remind myself that it’s better to have to deal with just my messes than with those of other people or of rats.  I try to remind myself it could be worse.  Couldn’t it?